A is for Anakin Skywalker

We are first introduced to Anakin in Episode I, in which he is a nine year old slave boy living with his mother, Shmi Skywalker on Tatooine.

The Jedi Qui-Gon Jinn and Padme﻿, Queen Amidala's handmaiden, are searching for parts to repair their ship when they find Anakin. When it becomes clear to Qui-Gon that they will not be able to buy the needed parts with the money they have, they turn to Anakin for help. Anakin is passionate about Podracing and he is good at it, too. Normally, humans are not capable of Podracing, but because of his small size and his quick reflexes, Anakin is an exception. After convincing his mother that he will be fine, Anakin enters the Boonta Eve race for Qui-Gon.Before the race, Qui-Gon takes a sample of Anakin's blood and finds that he has a higher count of midi-chlorians than Master Yoda. He asks Shmi who Anakin's father was, and she tells him "There was no father." Qui-Gon is sure that Anakin is the Chosen One, the being who will bring balance to the Force.

Against all odds, Anakin wins the race, providing Qui-Gon with the money for the parts and winning his own freedom.
Qui-Gon tells Anakin that he is free and can come back with him to be a Jedi. Anakin readily agrees-until he realizes that his mother will be staying behind.﻿ Uncertain, he hesitates to leave his mother, but she encourages him to follow his dreams.

He leaves his homeworld of Tatooine with Qui-Gon and Padme. When he is brought before the council, they say he is too old to be trained as a Jedi and he has too much anger in him.﻿ But they agree for Qui-Gon to look after him.

Back on Naboo, Anakin gets separated from the Jedi. He hides in a Starfighter, which goes into autopilot, taking him to the battle above the planet. There, he uses his Podracing skills to blow up the Trade Federation's droid ship, and the battle is won.
After a fierce battle in the Naboo palace with a Sith Lord, Qui-Gonn dies. The Jedi Council finally agrees to let Anakin be trained and Qui-Gon's apprentice, Obi-Wan Kenobi, becomes Anakin's Master.

Read the Jedi Quest series by Jude Watson to learn about Anakin's adventures between Episodes I and II.

In Episode II, Anakin is twenty and he is returning to Coruscant with Obi-Wan on a mission to protect Senator Amidala, the former Queen of Naboo. Anakin has loved Padme since he first met he in Tatooine when he was nine and is quite nervous about seeing her again.﻿ That night, while Padme is sleeping, an assassin attempts to end her life. Anakin and Obi-Wan chase down the assassin to find who wants Padme dead. After the chase, Anakin is assigned the duty of escorting Padme back to Naboo, where she grew up. While they are there, they realize their feelings for each other, but decide to ignore them, since it is forbidden for Jedi to have attachments.
After having a terrible nightmare about his mother, Anakin decides to go help her on Tatooine. He and Padme track Shmi to the Lars family, where Shmi was bought as a slave by Cliegg Lars, freed, and married. At the Lars' home, Anakin is reunited with C-3PO, the protocol droid he build as a child. Cliegg tells them that Tusken Raiders captured Shmi and she has been missing for weeks.
Anakin borrows a swoop bike from his step brother and sets of to find his mother. When he finds her in the Raiders' camp, she dies in his arms, telling him how much she loves him and missed him. Filled with anger and hatred for the Tuskens, Anakin kills every last one of them in the camp, including the women and children.
After saying farewell to his mother, Padme's droid, R2-D2 brings Anakin a plea from Obi-wan. Anakin wants to refuse to help his master, but Padme convinces him to go. On Geonosis, Anakin and Padme are captured in a droid factory and taken into the execution arena along with Obi-Wan. Before their cart enters the arena, Padme admits that she cannot deny her love for Anakin.

In the arena, the three fight valiantly against the animals sent to kill them and are rescued by the Jedi and the clone army. After their escape, Anakin and Obi-Wan chase down Count Dooku, the man responsible for this. They fight in the hanger where Dooku's ship awaits. Anakin attacks Dooku with his lightsaber to soon, which costs the young Jedi his right arm. With both Obi-Wan and Anakin injured, Dooku prepares to kill them, but Master Yoda comes to their rescue.

Once Dooku is chased off, Anakin is sent to escort Padme back to Naboo. Before returning to the Jedi Council, Anakin and Padme are married in secret.

In Episode III, Anakin, no longer an apprentice, is sent with Obi-Wan to rescue Supreme Chancellor Palpatine from Count Dooku and General Grevious.

During the fight, Obi-Wan is injured and Anakin quickly steps in to defend his former master﻿. Palpatine urges Anakin to kill Dooku, and after a brief hesitaion, he complies.

He and the Chancellor escape the ship with Obi-Wan just before it is destroyed.
Upon returning to Coruscant, Padme, Anakin's wife, tells him that she is pregnant. That night, he dreams of Padme dying in childbirth.
Chancellor Palpatine takes Anakin to the Galaxies Opera House and tells him the story of Darth Plageius, a Sith Lord who could stop death. Anakin is intrigued. Can he save Padme this way?
In the Chancellor's room, Anakin listens to what Palpatine has to say. He tells Anakin that he has learned about the force, both the light side and the Dark Side. Shocked, Anakin realizes that Palpatine is the Sith Lord they have been hunting for. But he cannot bring himself to kill his former friend, so he turns the Chancellor over to the Jedi Council.

In his apartment, Anakin concludes that he cannot let Palpatine be killed, because he wants to save Padme, his wife. Anakin rushes back to Palpatine's rooms and distracts Mace Windu, causeing him to be thrown out the window. Anakin is horrified with what he has done, but Palpatine-Darth Sidious-reminds him of what could happen to Padme. Anakin then pledges himself to the Sith and takes on the name Darth Vader.
Taking orders from Sidious, Anakin kills every Jedi in the temple-including the younglings-and then goes back to his appartments. There he tells Padme that the Jedi tried to murder the Chancellor and he must go to Mustafar to end the war.
After reassuring Padme, he leaves Coruscant for the volcanic planet of Mustafar. On Mustafar, Anakin kills all the separatists, saving Viceroy Nute Gunray for last. Then Padme's ship arrives on Mustafar, and Padme comes after Anakin. SHe tells Anakin that she has heard he did terrible things. Anakin becomes angry, saying Obi-Wan is trying to turn her against him. As he turns, Obi-Wan comes off of Padme's ship, which he stowed away on. Filled with anger and rage, Anakin chokes Padme with the Force and throws her aside. 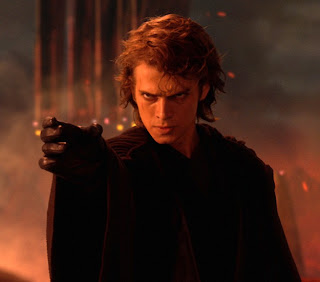 Then he ignites his lightsaber and begins a firece duel with Obi-Wan. Obi-Wan does not want to kill his former apprentice, but realizes that Anakin is no longer his friend. He severs Anakin's legs and left arm, causing him to fall near a lava pool. As Anakin begins to burn, he screams for his friend to help him. Obi-Wan refuses and Anakin yells "I hate you!" Obi-Wan takes Anakin's lightsaber and leaves.

After Obi-Wan leaves Anakin, Darth Sidious and his Clone officer find him lying beside the lava pool.The Sith Lord saves his new apprentice and brings him back to his medical facility. After the medical droids complete their work, Darth Vader awakens in  black full-body armour, complete with a breathing device to help his burnt lungs function.  The first thing Vader does is ask for Padme. Sidious tells his apprentice that he killed his wife in his anger. Horrified, Darth Vader screams and devotes himself completely to his new master.

In Episodes IV and V, Anakin does not show any compassion as Darth Vader, killing anyone who defies him. (But in the series Rebel Force by Alex Wheeler, Darth Vader struggles with emotions and memories of his past.( In Episode V, he learns that Luke Skywalker is his son and almost kills him. He offers to let Luke join him, but Luke refuses.
In Episode VI, as Vader fights with Luke in front of Darth Sidious, he is injured.﻿
When Sidious prepares to kill Luke, Anakin returns and realizes that he cannot let the Sith Lord kill his son. he attacks Sidious and throughs him down a shaft on the Death Star, killing him. Luke rushes to help his father, but it is too late. Anakin removes his mask to see his son's face.
As he breathes his last, he tells Luke that he has indeed saved him, for Anakin returned to the Light side of the Force. Luke sees his father one last time as being one with the Force on Endor during the celebration of freedom.

Look for my post "V is for [Darth] Vader" (Coming Soon) to learn about Anakin when he served the Dark Side.
Posted by Elf at 5:06 PM 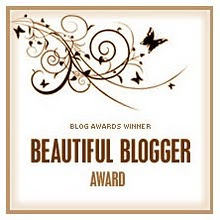 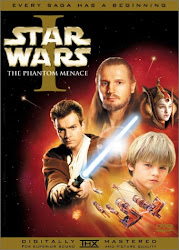 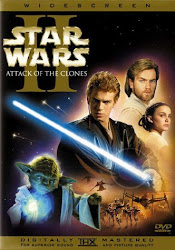 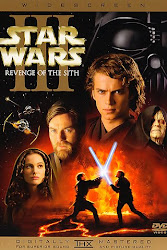 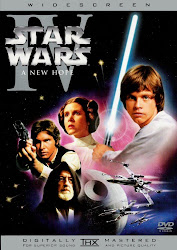 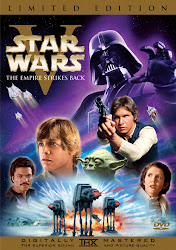 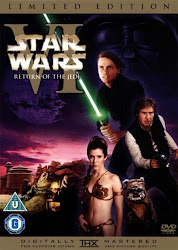